Perfect weekend at the Nürburgring-Nordschleife

A pair of overall wins, class achievements and podium finishes. 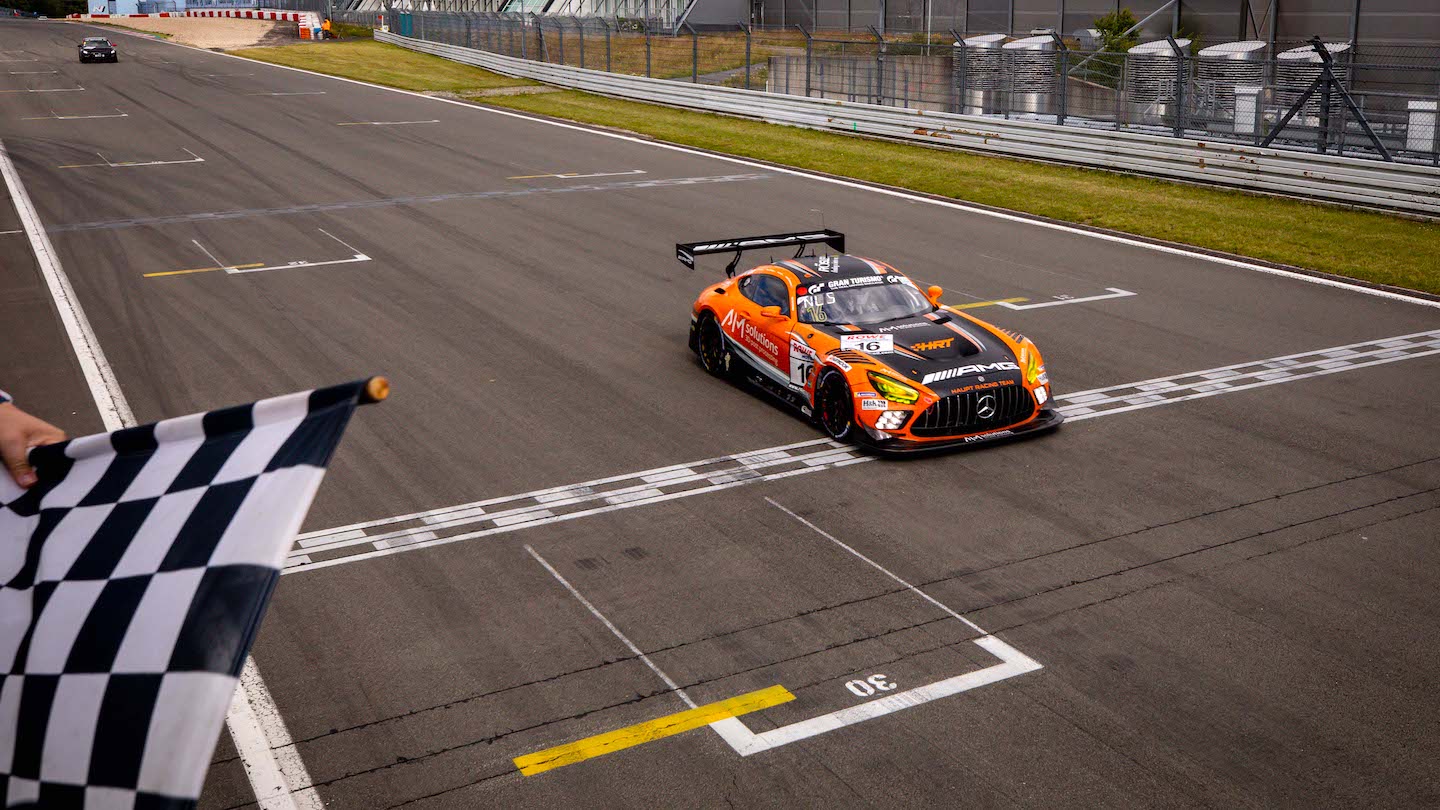 Affalterbach. The first-ever double-header event in the Nürburgring Endurance Series (NLS) saw Mercedes-AMG Motorsport scoring the first pair of victories with the new Mercedes-AMG GT3 that has been in competition since this year. In the second NLS round of the year on Saturday, Mercedes-AMG Team HRT (#16) was first across the finish line. On Sunday, the newly-founded team went on to score the second overall win. Mercedes-AMG Team Getspeed (#2) also mastered the double duty in a convincing manner with a third and a fourth place. In the SP9 Pro-Am class, GetSpeed Performance (#8) also secured second place on Sunday. BLACK FALCON Team TEXTAR (#155) rounded out a successful weekend in the ‘Green Hell’ with a pair of first places in the SP8T class.

Persistence was key this weekend. For the first time in history of the Nürburgring Endurance Series, two races at the Nürburgring-Nordschleife instead of the usual one-day event were held. Both in the second race of the year on Saturday and in the third round on Sunday, Mercedes-AMG Performance Teams GetSpeed and Haupt Racing Team (HRT) demonstrated their endurance skills in the races of four hours each. They were rewarded for their efforts: victory and third place on Saturday, victory and fourth place on Sunday.

In the qualifying sessions already, the Mercedes-AMG Team HRT’s entry with starting number 16 presented itself in a promising way. On Saturday, Maro Engel drove the Mercedes-AMG GT3 to third on the grid while Luca Stolz secured pole position on Sunday. It was also Stolz who, as the starting driver on Saturday, already took the lead after a few laps and thus laid the foundation for the eventual victory. After him, Manuel Metzger and Adam Christodoulou took over driving duties in that order. Thanks to their commanding performance and a well-timed pit stop strategy at the 24.358 kilometres long combination of the Nürburgring-Nordschleife and the short track configuration of the Grand Prix circuit, finishing driver Maro Engel was able to start the final stint with a reassuring margin over the opposition and eventually crossed the finish line in first place after 28 laps. That secured the maiden victory for the new Mercedes-AMG GT3 at the legendary track in the Eifel.

On Sunday, the quartet with starting number 16 went on to add the next overall win straight away. Having started from pole position, Engel immediately built up a margin over his rivals in the opening stages. Stolz drove an equally faultless stint and it already became apparent that the pit stop strategy would work out once again. Manuel Metzger was the third driver behind the wheel and also delivered as planned. He then handed the car to final driver Adam Christodoulou with a tiny advantage over the competition. After a thrilling final lap, the Brit initially was second across the finish line, only 0.7 seconds down. Following the exclusion of the opponents, the Mercedes-AMG GT3 was promoted to first place, the second win in as many races this weekend.

Sharing driving duties in the #2 Mercedes-AMG Team GetSpeed entry on Saturday, Maximilian Buhk and Fabian Schiller also showed themselves in good shape. The duo was in contention for a podium finish throughout the four-hour race and secured third place in the overall classification in the thrilling finale of the battle for the remaining top positions. On Sunday, Maximilian Götz and Raffaele Marciello were the line-up in the yellow-and-black Mercedes-AMG GT3 and this driver combination also ended up in the top 5 with fourth place, once again in excellent race conditions in the Eifel.

In both races, the newly-founded Mercedes-AMG Team HRT put another pair of Mercedes-AMG GT3s on the grid. The car with starting number 17 finished eleventh on Saturday with Yelmer Buurman, Hubert Haupt and Gabriele Piana. On Sunday, Nico Bastian drove instead of Piana. The trio concluded the race in seventh place overall.

Patrick Assenheimer, like Schiller and Piana a member of the Mercedes-AMG driver line-up as a Nordschleife expert for the current motorsport season, finished 16th in the race on Saturday together with his colleagues Dominik Baumann and Dirk Müller in the #6 Mercedes-AMG GT3. Today’s race resulted into a tenth-place finish.

Victories in the SP8T class, a podium in the SP9 Pro-Am category

The Mercedes-AMG Customer Racing Teams also put in strong achievements at the weekend. With the GetSpeed Performance Mercedes-AMG GT3 with starting number 8, Christer Jöns and Matthieu Vaxiviere finished in seventh place on Saturday. Starting in the SP9 Pro-Am class, Emmanuel Collard and Francois Perrodo drove the same car to second place on Sunday.

Once again, BLACK FALCON Team TEXTAR with Maik Rosenberg, Stephan Rösler and Tristan Viidas behind the wheel of the Mercedes-AMG GT4 (#155) showed a dominant performance both on Saturday and Sunday in the SP8T class. Already victorious in the season opener, the trio was again first across the finish line in both races.

As a result of the strong overall achievements by all the cars, Mercedes-AMG Motorsport is also moving up into the points’ lead of the Nürburgring Manufacturer Championship, the combined manufacturers’ ranking across the NLS and the 24-hour race. The fourth of the eight scheduled rounds of the 2020 Nürburgring Endurance Series will be the 43rd RCM DMV Grenzlandrennen on 1st August.

Stefan Wendl, head of Mercedes-AMG Customer Racing: “For us, the double-header event of the Nürburgring Endurance Series was a huge success. We have scored the first NLS race wins with the new Mercedes-AMG GT3, we were on the overall and class podium in both races and, above all, we have acquired valuable insights for the 24-hour race in September. All in all a very strong achievement by our teams at this stage during the season. We can build on this and continue our preparation for the highlight of the year at the Nürburgring in the coming weeks.”

Luca Stolz, Mercedes-AMG Team HRT (#16): “My maiden pole position at the Nürburgring-Nordschleife! It was an entirely clear lap; that really was fun. On my out lap, I already noticed: today, everything is spot-on – the track, the car, the tyres. These were two very strong races with victory yesterday and pole position and the success today. Many thanks to the entire team.”

Patrick Assenheimer, Mercedes-AMG Team HRT AutoArenA (#6): “We had some bad luck, particularly in qualifying. Because of code-60s, we didn’t have clear lap and were a little bit further back at the start. As a result, we were unable to compete for the positions at the front. However, it was highly enjoyable once more and we have learned a lot more with regard to the 24-hour race. This weekend was good preparation for it.”

Maximilian Götz, Mercedes-AMG Team GetSpeed (#2): “Being back at the Nordschleife and taking the start here was very nice. These were my first flying laps this year. I reckon that I have done a good job, just like the entire team. Meantime, the full focus is on the 24-hour race in September. Now, we have to find the rhythm for that.”

Fabian Schiller, Mercedes-AMG Team GetSpeed (#2): “On Saturday, we had a good race! Our strategy enabled us to maintain our position up front and eventually, we were happy with third place. We have improved our car even further compared to the first NLS round and we are on the right way. Preparation for the 24-hour race is in full swing.”

Hubert Haupt, team owner, HRT: “A top result! We have competed in three races and got a pair of second places and a first place. That is a dream start for a new team, especially against such opposition. We are absolutely happy.”

Adam Osieka, team principal, GetSpeed Performance: “It is a super result for us in the SP9 Pro and also with our customer racing car in the SP9 Pro-Am class. With the Performance GT3, we are focussing on the 24-hour race. That is what we have strategised for and we have acquired valuable experience.” 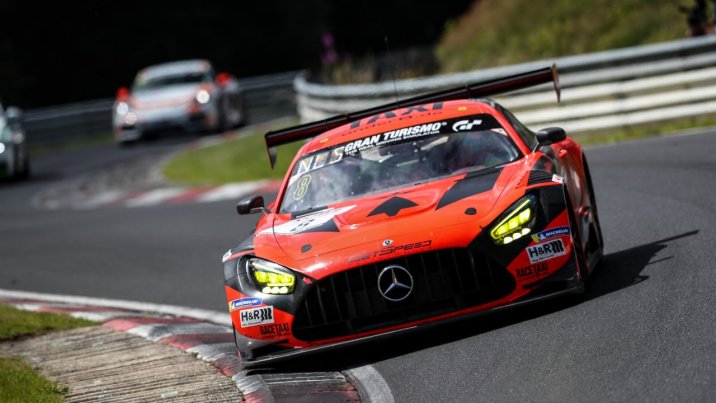 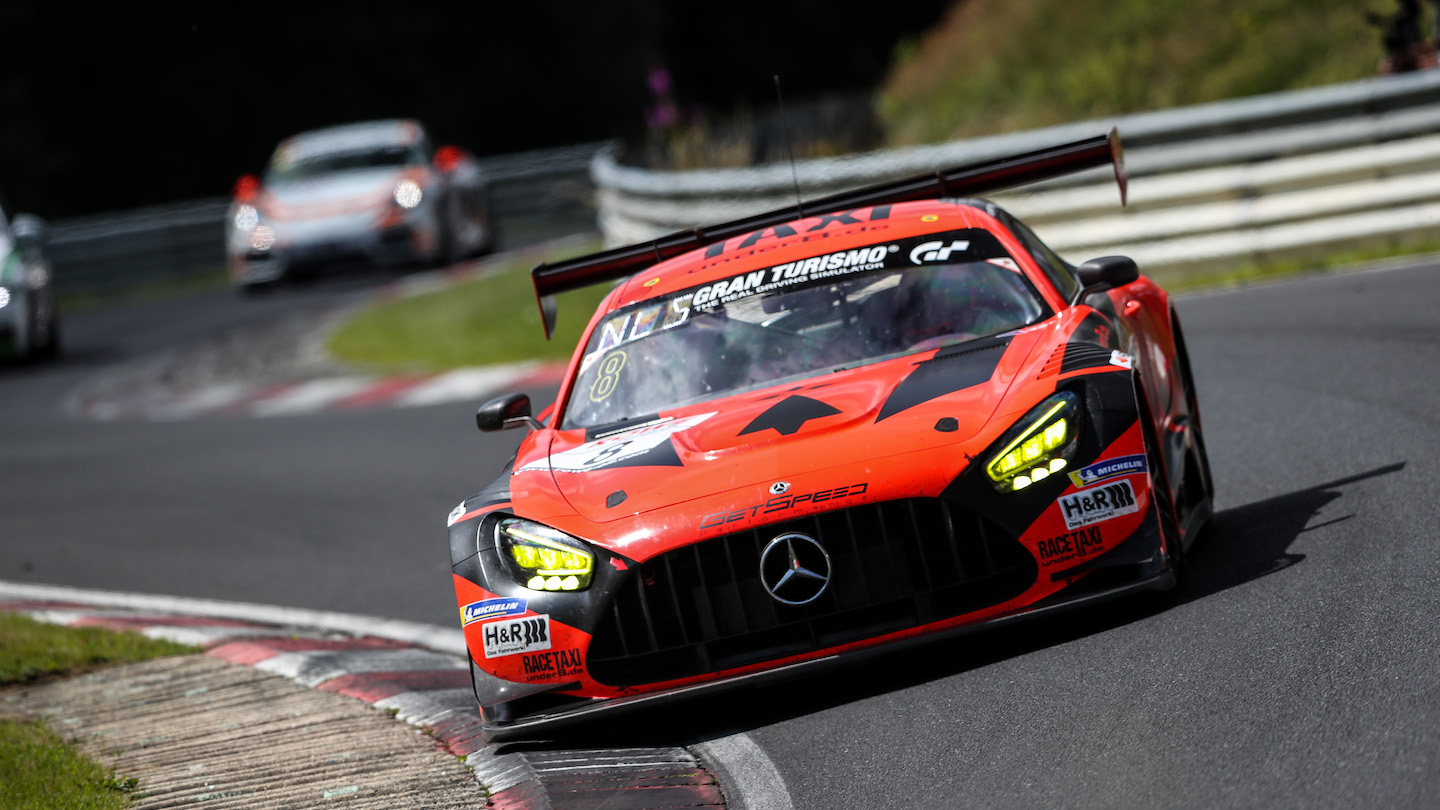 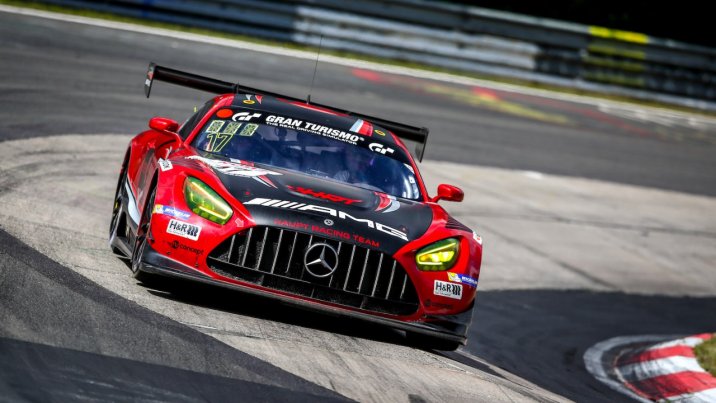 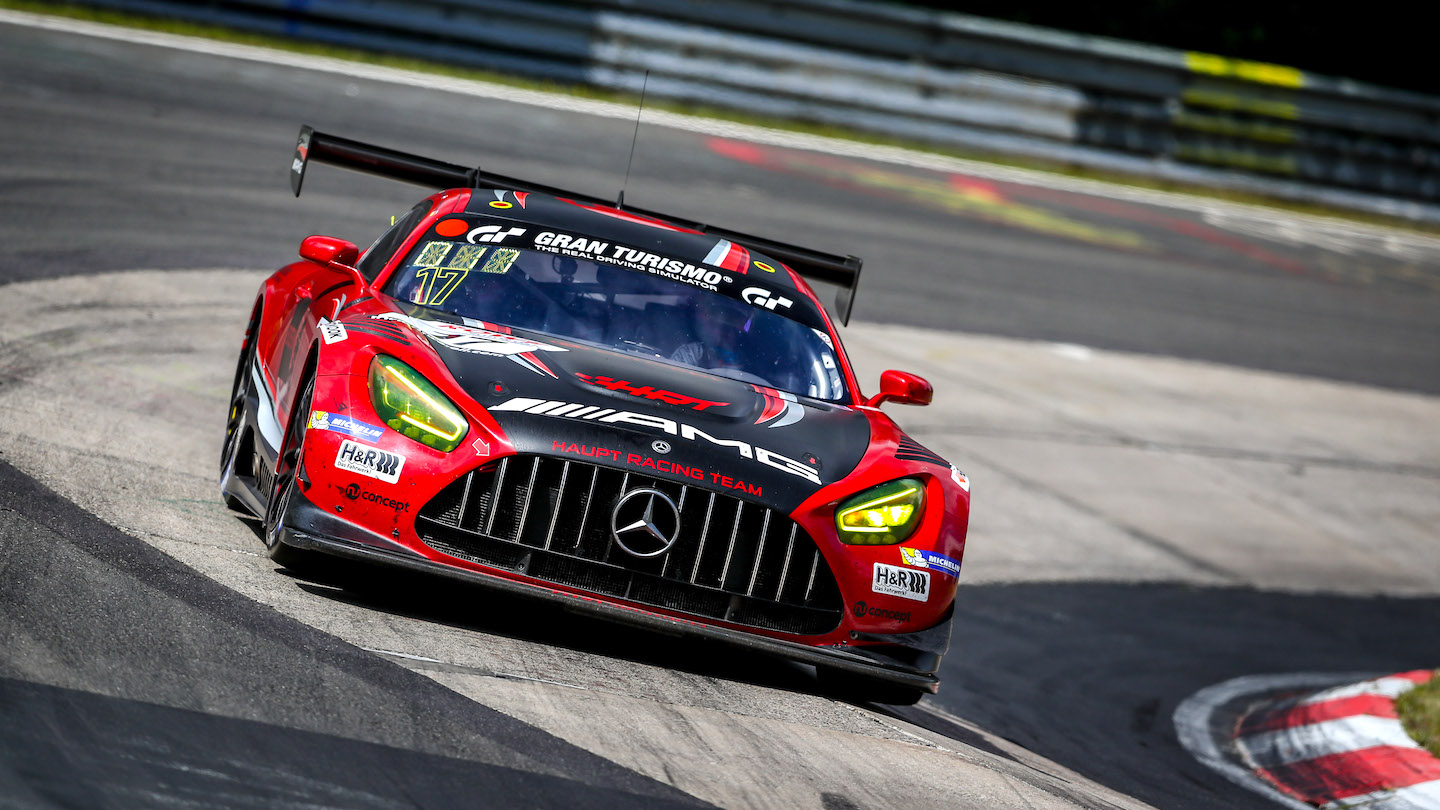 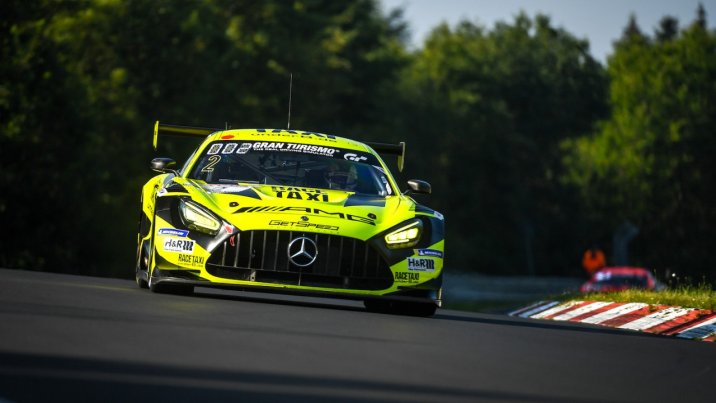 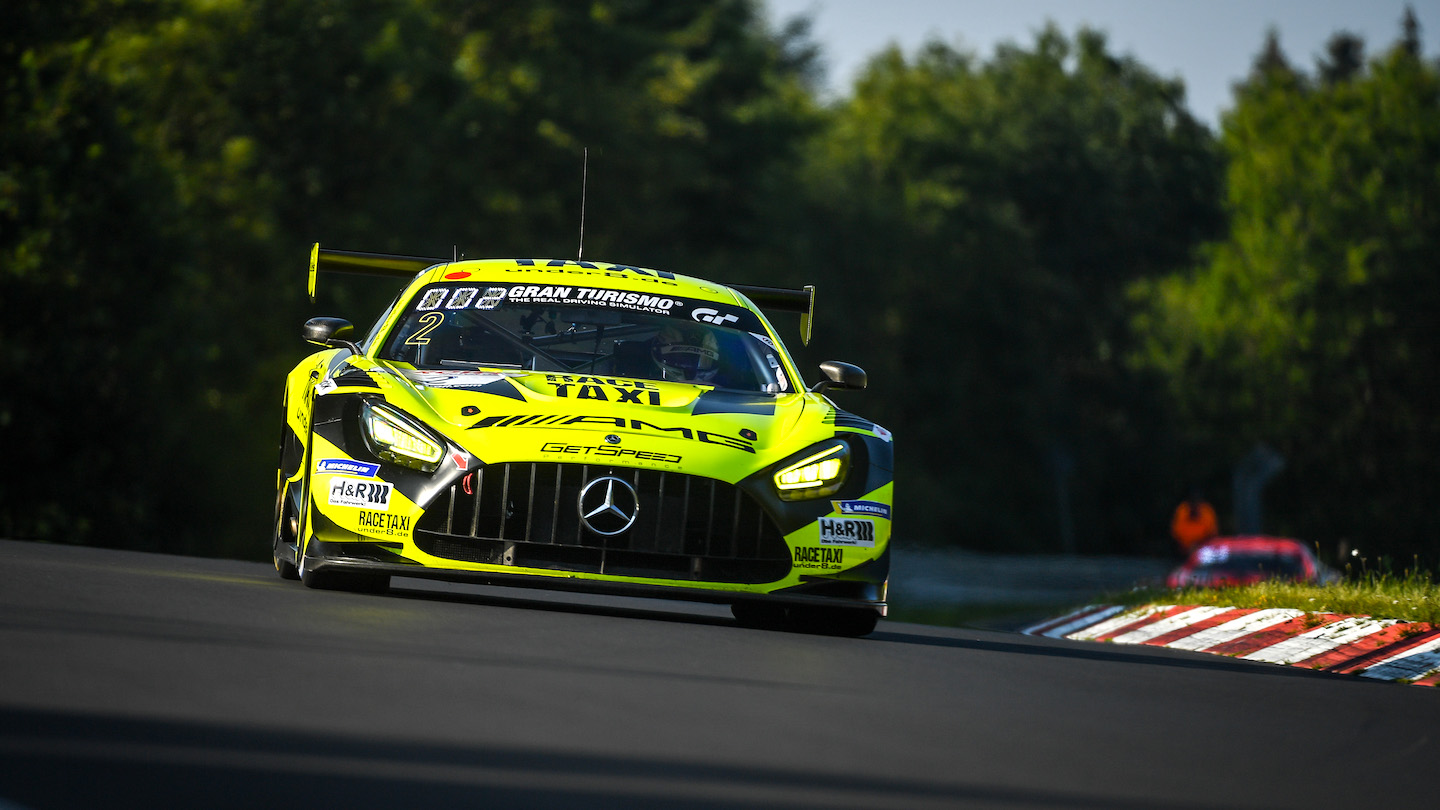 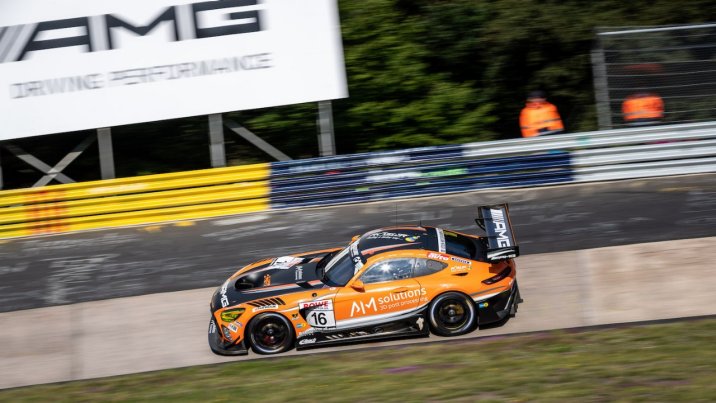 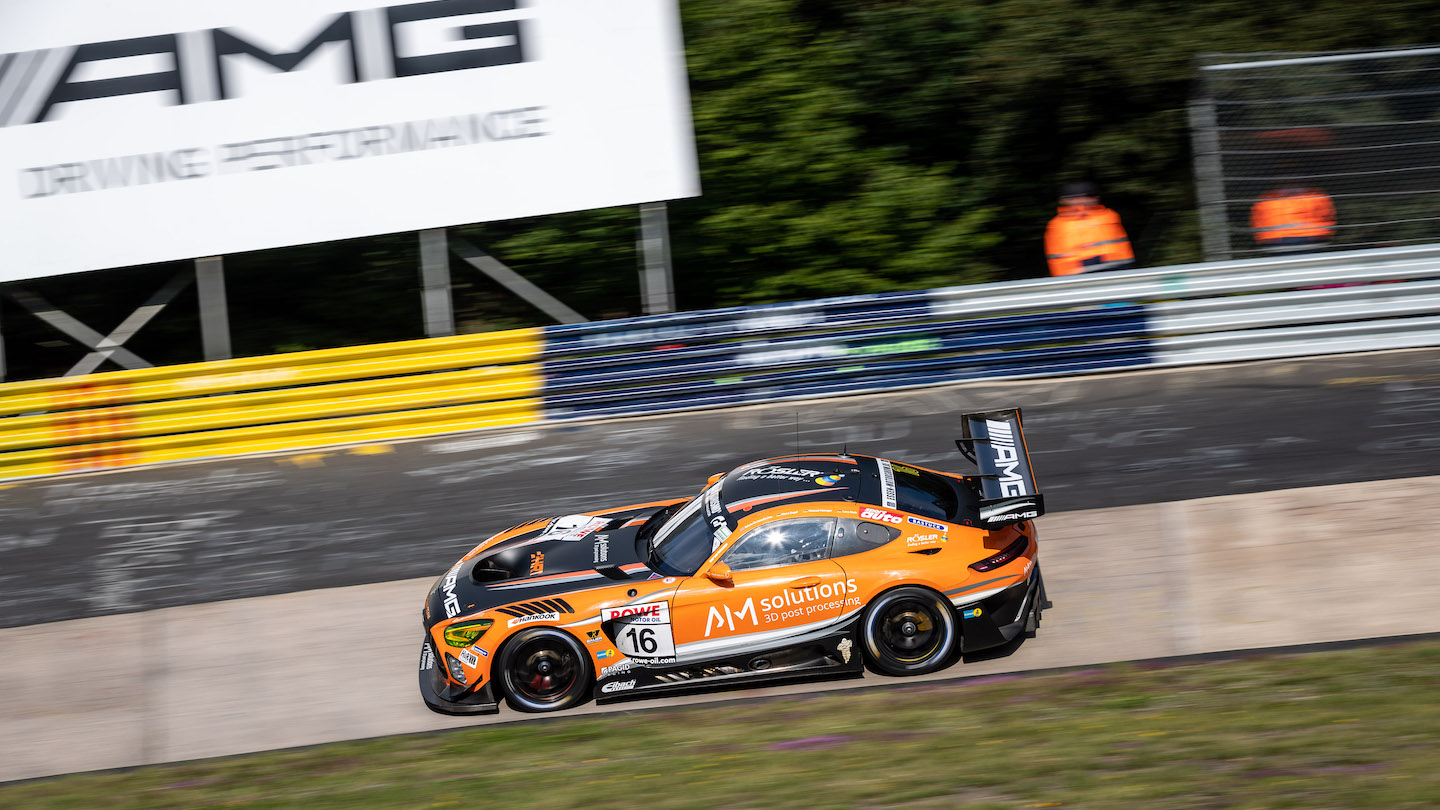 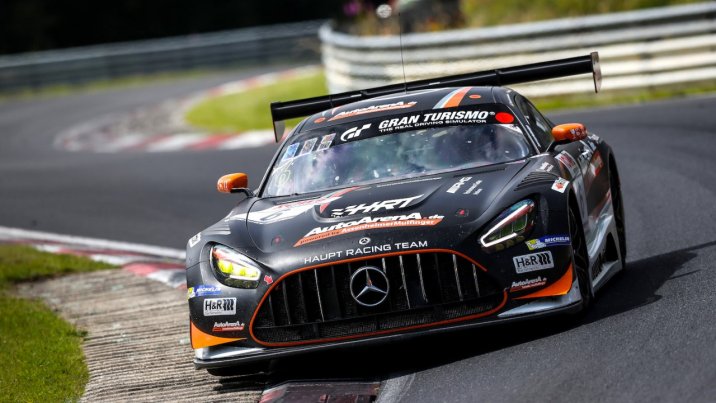 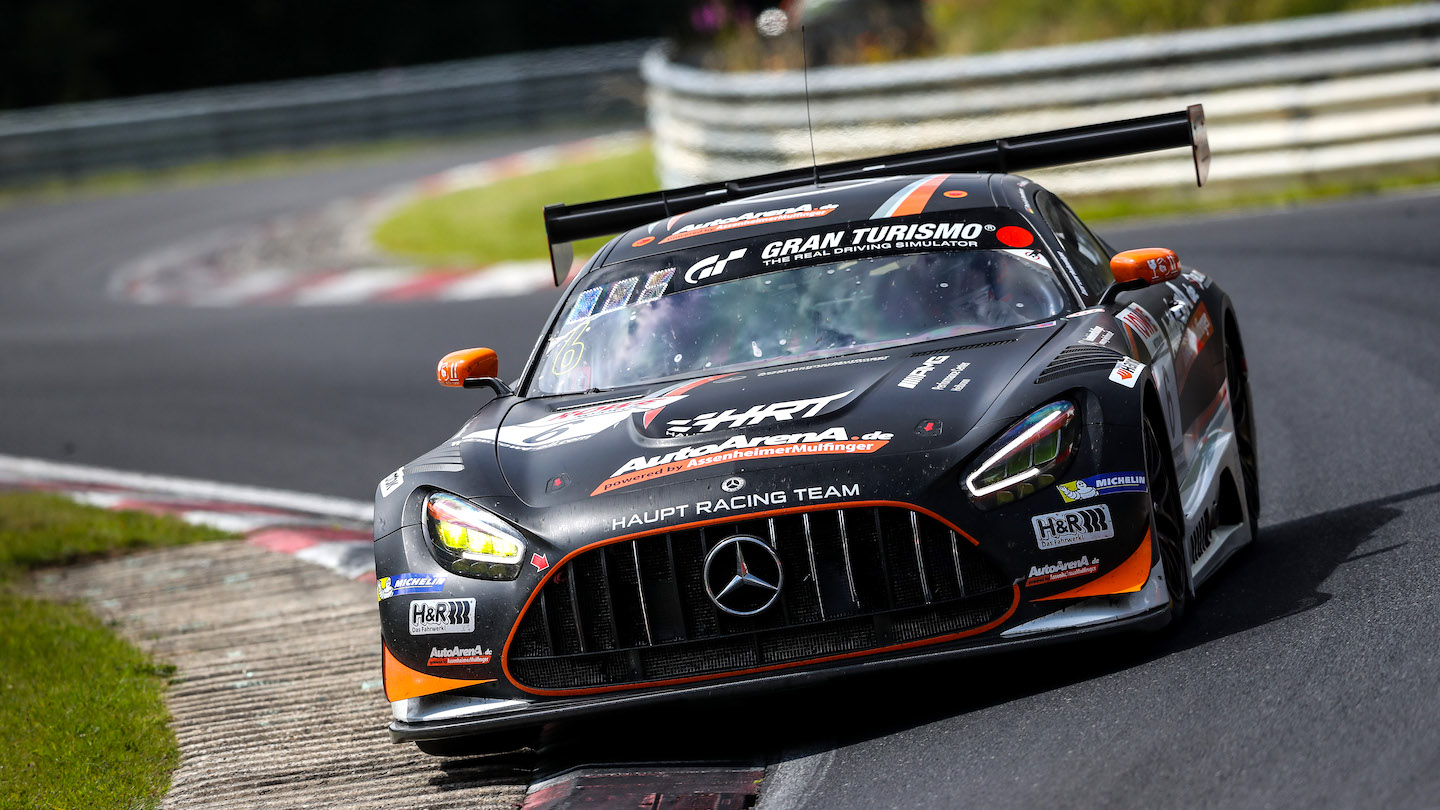 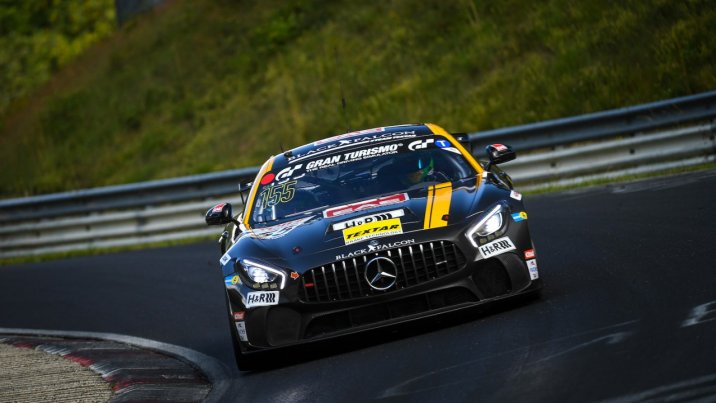 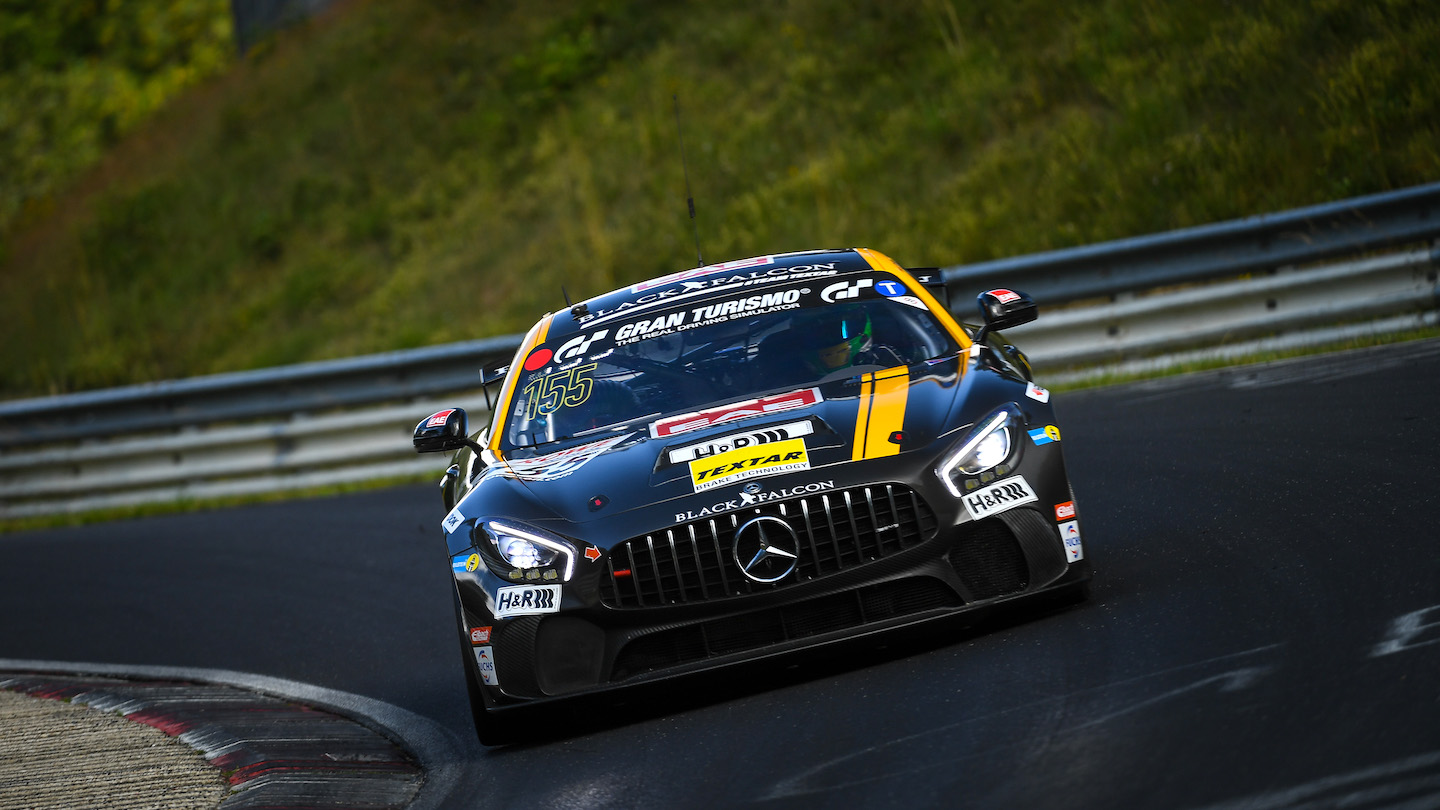